Email ThisBlogThis!Share to TwitterShare to FacebookShare to Pinterest
Labels: Writing2017

Email ThisBlogThis!Share to TwitterShare to FacebookShare to Pinterest
Labels: Maths2016


We have just been outside racing against our friends. 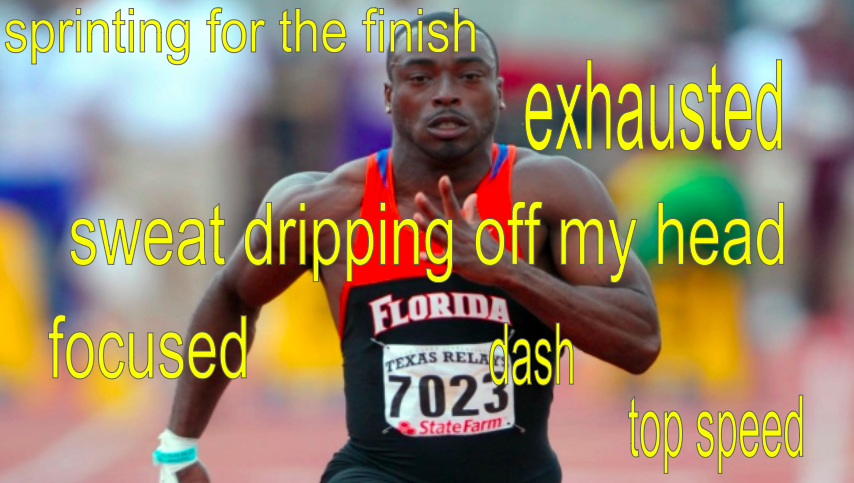 Use these words above and below to help with starting your sentences.

Plan Here:
COOL WORDS: First
Next
Once we
During
TOPIC SENTENCES:
P1: First Mr moran said the first group come up and when he slapped the slapper they ran and some of them came.1st.2d.3rd.4th and.Miss moala picked the.1rst.2nd and.3rd to the finals.    P2:Then it was my group and i almost came last.But latisha came last.But i wasn't in the finals so i went back to my spot. p3:Then it was the boys turn and some of them were in the finals.Because some of them came.1st.2nd and.3rd and.4th
P4:then we did hands and feet and central came last and Mr Moran and John came first but john was cheating because he was standing up.


Yesterday we went in 2 lines and went on the concrete and we were  having races.First it was Norah Jade to Leylani in the first group but it wasn't my group so i stayed in my spot waiting for my turn to race then the race was finished and the.1st.2nd.3rd.4th.was in the.Finals and in the finals was.Mia.Maddie.Nature and.Norah jade.Then it was the boys turn and the ones who was in the finals was.John.Joseph.Jerry and.someone else that i don't know.Then It was the finals.But...They had to crawl on their feet and hands and.Central came last.

Email ThisBlogThis!Share to TwitterShare to FacebookShare to Pinterest
Labels: Writhing 2016


Complete the hundreds board.


Today you will be writing a narrative.  In order to help you get started, we selected some pictures for you to use in your writing.  You must use ONE picture. 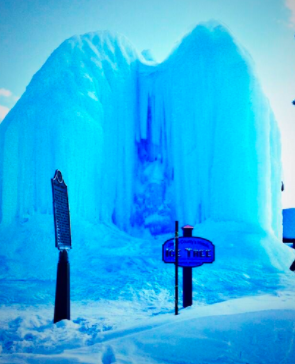 When you have decided which picture you want to use, delete the other 3 and enlarge the picture you have chosen.


Begin Writing Here:
Once upon a time there was a person that lived in the snow and she was so so so cold like ice.Then one day she found a cave.So she went inside and had a sleep because.It was nighttime and in that night she had a dream and the dream was.About a bear trying to eat her.Then…..She woke up she went outside and there was a big grelling white polar bear right behind her then.He was going to eat her.Then the girl said.Please don't eat me i'm just a little girl.Then the bear said.Oh i wasn't trying to eat you.Then the girl said.Oh then what were you doing i was trying to tell you to get out of my cave.Then the girl said.Oh sorry can we be friends.Then the bear said.Ok let's be friends.So they played and they played and they played.Until they grow up and then they met another.Bear and that bear was a.Girl and it was nighttime and she said.Can we all be friends and then they said………..No we can't and then she said.What wuy.Then they said.Because we don't want to be your friend.Then she said…………...I'm going to tell my family and they're stronger than you then the other polar bear said.Wait little girl.Then the lady said.Im not a little girl i'm a grownup now.
P2 Friendship broken
Then the polar bear said.Im not your friend any more.Our friendship is over.Then the lady said.Why then the polar bear said.Because you yelled at me.Im going to my family.Then the girl said.Well then i will be sarahs friend.Then the polar bear was so so sad.Then the lady said.Hey sarah.Then sarah said.Hey where's jake.Then the lady said.He yelled at me so i'm not his friend any more.Then sarah said.Why aren't you his friend.Then the lady said.Because he yelled at me.Then sarah said.Im not your friend.Then the lady said.Im getting back to my family.
P3 Family time.
The lady went home in a  plain and she told her family all about her trip and she said. I saw a polar bear and his name was jake and then we saw a girl polar bear named.Sarah then her mum said.Wow you really had a great holiday.Then her dad said.We have a present for you and the lady said.Yay.So she opened the present and it was a picture of two polar bears one was a girl and one was a boy and the girl's name was sarah and the boy's name was.Jake then the girl said.Thank You guys and then she said.That looks like my polar bear friends then her mum said.What does it well then lucky we got that picture.
P4 visitors
The doorbell rang so the lady went to the door and opened it and it was.Sarah and.Jake and then she said.Get out of my house.Then her mum and dad said.Be there friend and you're grounded.Then the lady cried and cried and cried the end.
Posted by Julia at 10:58 No comments:

Email ThisBlogThis!Share to TwitterShare to FacebookShare to Pinterest
Labels: Writing 2016

Chapter one
Today i'm reading my new Duffy book called.Once upon a cruise. When. Ainleys mom told her they'd be spending the summer on a fairy-tale cruise'she pictured herself lounging by the pool.Instead' shes running all over the ship doing favor after favor for her cruise-directer mom.This is her mom's first new job in years' and with the captain breathing down their necks' Ainley has to be perfect.But things start to go wrong:The laundry turns pink"Ainley keeps needing to be rescued by the annoying guy playing the pig king' and her mom expects her to be in a hundred places all at once.Is this fairy-tale  cruise under a wicked cruise? Or can ainly stand up for herself and make the cruise end happily ever after?
Posted by Julia at 10:00 No comments:

Email ThisBlogThis!Share to TwitterShare to FacebookShare to Pinterest
Labels: Reading2016

Find fractions of a number E5

Using the fraction strips below to help you find these unit fractions.


1. Find a ⅓ of 18 by sharing out the number equally to the three boxes.

This is my new blog profile.It tells you all about myself.You might get a little bit of information about me.You could know how old I... 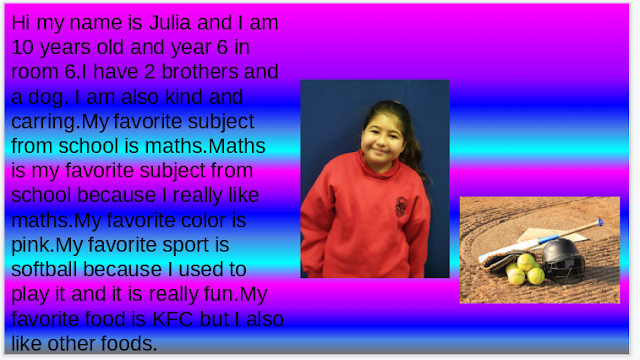 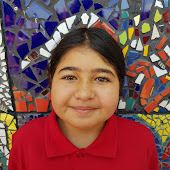 Kia Ora, my name is Julia and I am a year 7 student at Point England School. My classroom number is room 1, and my favourite sport is softball. Every Saturday we play our games, and every Tuesday and Thursday we train. My brother, dad, and my mum also play softball. My position in Softball is base 2 and 3, and sometimes out field. My favorite teacher at school is Miss Tuia. Miss Tuia is my favorite teacher because she is always sweet and kind. My favourite foods are KFC, and McDonalds. I am eleven years old, and I have two little brothers and a baby sister. One of my brothers is 9, and the other one is 4. My baby sister is now 2 months old. My best friends are Phoenix and Le’Shar. They are both in room 4 with Miss Stone. Thank you for reading my blog. Please leave me a comment.

Who is visiting this blog?